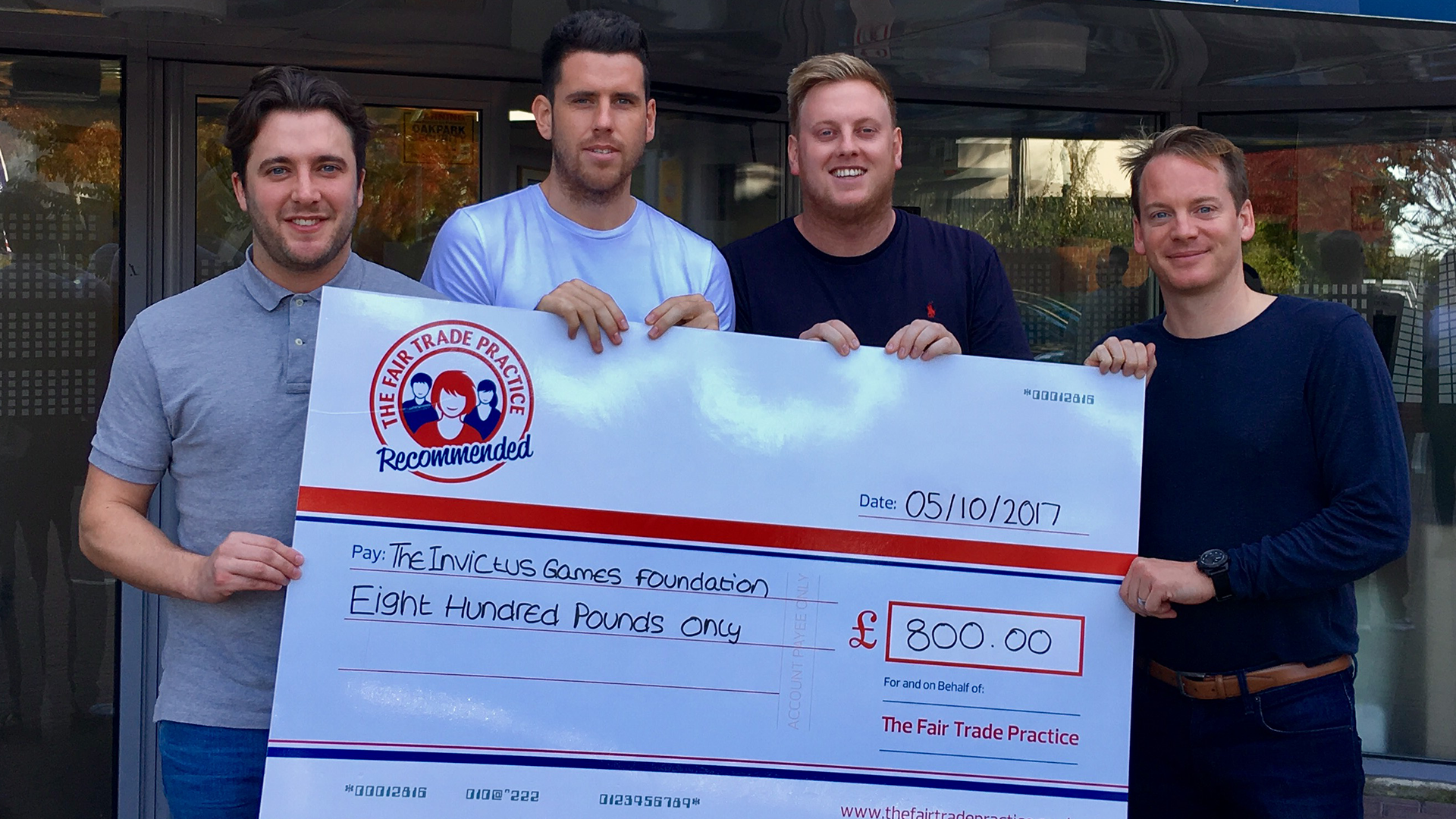 The Fair Trade Practice are delighted to be donating money to the Invictus Games Foundation following the inspirational efforts of former service men and women during this year’s Invictus Games in Toronto.

Inspired by so many incredible stories of courage and determination, staff in the Sales department took part in an Invictus-themed incentive throughout September which challenged them to raise their own aspirations and set new goals.

Thanks to their hard work they achieved a challenging target set for the whole team and we are delighted to be able to send the Foundation a cheque for £800.

Founded by Prince Harry, the Invictus Games sees ex-military personnel compete in a variety of sports as part of their rehabilitation in overcoming both mental and physical injuries.

More than 500 competitors from 17 different countries took part this year, the third games following London 2014 and Orlando 2016, with the UK team taking home 87 medals and a series of personal bests.

Funding for the games comes from the local and national governments of the host nation, as well as corporate sponsors. The Invictus Games Foundation oversees the delivery of each games, assesses bids from potential host nations and continues the legacy of each games by supporting the participants.

Money raised by The Fair Trade Practice will go towards the day-to-day running of the WIS Noticeboard, an important hub for wounded, injured and sick service personnel where they can find new opportunities, take part in new sports and even find employment. Part of the money may also go towards a new project which the Foundation is set to announce later on this year.

We are proud to continue supporting current and former armed forces personnel from all across Britain in any way we can. Much like those in the public sector, military personnel are likely to have had a range of job benefits which meant they were unlikely to have needed Payment Protection Insurance (PPI) added to any finance they may have taken out in the past.

We have found this to be the case for so many of our customers who are serving, or have previously served, that we were awarded a bronze award from the Armed Forces Covenant Employer Recognition Scheme (ERS) back in April 2016. The ERS recognises commitment and support from UK employers for current and former defence personnel and are given to organisations that pledge, demonstrate or advocate support to defence and the Armed Forces community.

The Fair Trade Practice were one of just 252 firms in the south east to have received the award before this year, and one of less than 10 in the naval city of Portsmouth.

To find out more about the Armed Forces Covenant ERS visit www.armedforcescovenant.gov.uk, and for more on the Invictus Games Foundation visit www.invictusgamesfoundation.org.

If you have ever served in the armed forces, or know someone who has, and want to see our award-winning service for yourself then find out if you could be owed compensation for mis-sold PPI today.