Q&A: Plevin update – why millions have new reason to check for PPI compensation 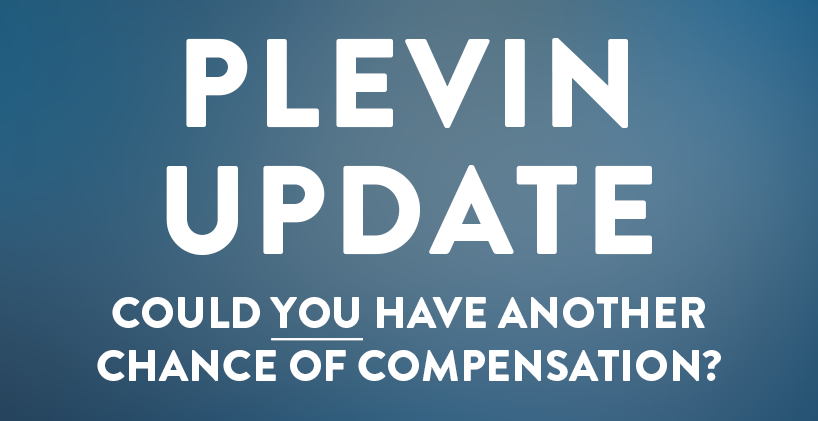 This time last year we gave you the latest information on the legal case known as Plevin and what it could mean for Payment Protection Insurance (PPI) claims.

Susan Plevin was a retired college lecturer who took her mis-sold PPI complaint all the way to the Supreme Court, where it was decided the amount of PPI premiums she had paid which were attributed to commission was unusually high.

In the words of Martin Lewis, founder of Money Saving Expert: “This new rule means, pretty much, if you had PPI from a bank on a product active since 2008, you’re owed some money.

This means millions of people who’ve had PPI, even if it was sold correctly in every other way, are due something back.”

These new regulations have now been in place for 6 months, so here is our latest Q&A update on Plevin to bring you right up to date:

Why is this a new reason to complain about PPI?

Standard PPI mis-selling complaints look at whether or not the product was suitable for, needed or requested by the customer. Common grounds for mis-sale include PPI being sold to someone self-employed who wouldn’t have been able to use the cover, or customers who were told they needed to take out PPI in order to get another product such as an overdraft.

However due the new rules, even if it was originally sold correctly, just having held had a PPI policy may now mean you are due compensation due to the amount of your premiums which the lender and any brokers may have taken as profit.

In simple terms any lender who sold a PPI policy where commission was over 50%, and the customer was not informed, must now pay compensation.

The amount due back to the customer is the difference between the rate of commission paid and 50%. We’ve broken down an example offer later in this blog.

So have I been Plevin-ed?

This is the term coined by Martin Lewis, who has highlighted the importance of the Plevin ruling since it came into effect in August.

The simple answer is that you are unlikely to know until you check your finances for PPI, but when you do check the laws of probability will be on your side.

Research from the FCA has found the average commission and profit share attached to PPI premiums for the twelve largest providers between 2002 and 2006 was 67%.

Just think what this means in real terms – for every £1,000 paid in PPI premiums, an average of £670 was going to lender and brokers in commission.

So with the majority of PPI premiums above the 50% threshold for commission it is likely you are now owed some money back if you have ever had a PPI policy.

Of course many people are unsure if they have ever had PPI attached to their finances, just like 95%* of our successful customers were before they started working with The Fair Trade Practice.

Martin Lewis says he has ‘never heard of anyone’ who was informed about levels of commission on their PPI policy, saying: “While that doesn’t mean no one was, it’s likely to mean very few were”.

Who is eligible for a Plevin claim?

Part of the FCA regulations made lenders write to some customers who had previously had a PPI complaint rejected to inform them of the new rules, the claims deadline and the fact that they may now be entitled to compensation.

Although this only covered consumers matching a certain criteria, FCA estimates say 1.2m people should have received these letters by December 2017.

If you have previously had a complaint about mis-sold PPI rejected, had your case turned down by the Financial Ombudsman Service (FOS) or not taken your case to the Ombudsman at all then you can now have your complaint reassessed in relation to undisclosed high commission.

Any other customers who may be entitled to compensation but are yet to complain will not be contacted proactively by lenders, and the August 2019 claims deadline will still apply.

If you have previously had a successful PPI mis-selling complaint then you would have received back all the premiums you had paid, including all the commission. Therefore there is no case for further compensation via a Plevin complaint.

Here’s a helpful graphic from the FCA that explains your options: 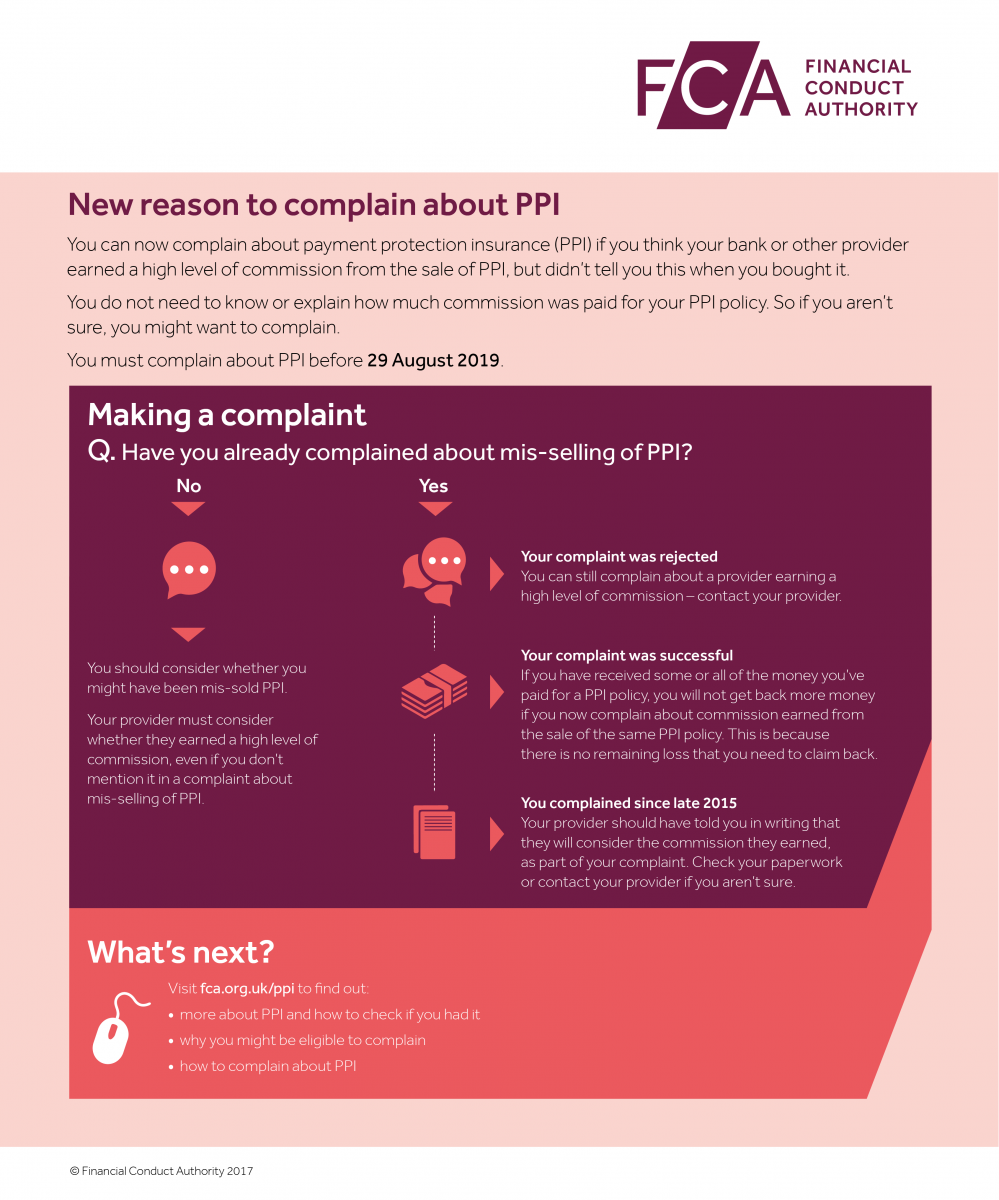 So what could a Plevin offer of compensation actually look like?

We know Plevin can get very confusing very quickly. So here is a basic breakdown of what an offer of compensation for a commission-based complaint might look like step-by-step:

This example uses lower figures for the sake of clarity but commission-based complaints have resulted in offers of compensation in the thousands, and here at The Fair Trade Practice our biggest Plevin offer so far has been for £31,000**.

How bad was this problem if new claims are only just coming to light?

In the landmark case itself the level of commission paid by retired college lecturer Susan Plevin on her PPI policy was 71.8%. After finding this out Mrs Plevin took her case right up to the Supreme Court and had to wait 5 years to receive a final decision.

Another five-year gap followed before the FCA brought in the new guidelines, hence why commission-based complaints have only just come to the fore despite PPI having been around for almost a decade.

145,000 Ombudsman cases were held up awaiting the outcome of Plevin, and that figure does not take into account claims which had been previously investigated and those which were sold correctly.

As for how bad this problem was, one claim we have seen here at The Fair Trade Practice showed a commission level of 100% for a whole 2 years of the policy***. Needless to say that customer’s complaint was successful.

A 2015 study estimated that refunds paid out as a result of the Plevin ruling could reach as much as £33bn.

Martin Lewis of MoneySavingExpert.com told the Guardian: “There are hundreds of thousands if not millions of people who have already complained about PPI and been rejected who may actually be due their money back.

“This latest case likely adds to that – with even more people brought into the mis-selling net, many of whom will have already been rejected.”

I have a claim with The Fair Trade Practice which has been on hold due to Plevin. What happens now?

If you already have a claim with us and you have previously been told that it is on hold due to Plevin then we will be in contact as soon as your case is actioned with more information.

At present, lenders are still able to inform consumers that they cannot yet provide a final response to complaints affected by Plevin.

Any customers who have had a claim with us in the past and seen the investigation closed may well find their case being looked into again following the final outcome of Plevin.

If this is the case for you and one of your claims is affected we will be in touch to inform you of the next steps. Under FCA guidance we may need you to sign a fresh letter of authority (LOA) in such cases.

Can I make a new complaint about mis-sold PPI or undisclosed levels of commission?

Yes. If you have not yet submitted a complaint about the mis-selling of PPI then you can do so now, and as well as their usual investigation into whether or not you consented to or knew about the PPI, your lender must also consider whether or not they charged more than 50% of your premiums as commission without telling you.

Despite previously successful complainants being unaffected by the new rules, the FCA has warned lenders against making partial payments to consumers at the mis-selling stage in order to try and avoid higher payouts relating to undisclosed commission at a later date.

Firms have also been challenged ‘to ensure they deal fairly and promptly with PPI complaints’ by the regulator, who will ‘take action where firms fail to act fairly’.

So in summary what should I be doing now?

A deadline is just 18 months away for all new PPI complaints, and that includes those affected by the Plevin case as well as those who were previously rejected and now wish for their complaint to be re-assessed.

All existing customers at The Fair Trade Practice will be kept up to date every step of the way, and can rest assured that we will act in their best interests to pursue the lenders and ensure any compensation due is paid out.

If you are not already working with us then there is still time. For any PPI complaint being raised for the first time lenders must now automatically consider levels of commission after looking at grounds for mis-sale.

Lenders have the same eight-week timeframe to respond to complaints about undisclosed commission as they do for mis-selling complaints, so don’t wait for the system to become backlogged.

Start your investigation with us before it’s too late, and find out if you could be owed some of the billions in lender provisions which are yet to be claimed.