Q&A: What is the PPI fee cap and what does it mean for me? 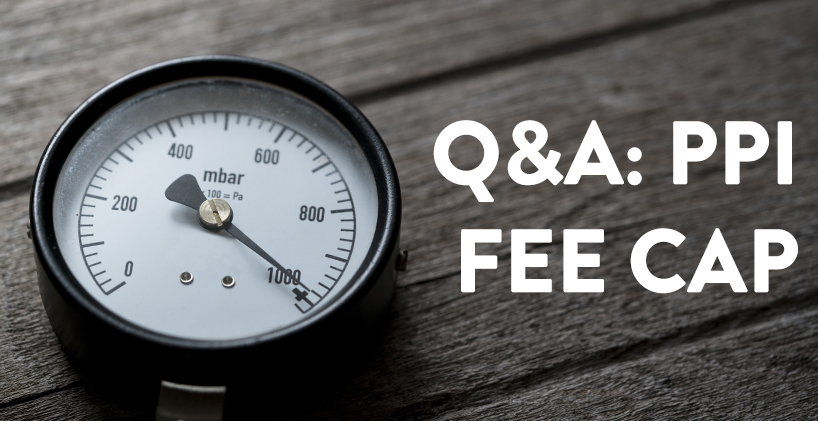 With a deadline already set for August 2019, the PPI claims industry is already going through perhaps the biggest period of change it has ever seen.

From this month though another major change will affect all consumers who use a claims management company to complain to their lender about mis-sold PPI.

In order to protect consumers against what they see as disproportionately high fees charged by some CMCs, the government has brought in new regulations which mean any firm providing services related to PPI claims is now limited in how much it can charge.

Here’s everything you need to know in relation to the fee cap and how it could affect your potential claim for mis-sold PPI.

First thing’s first, what level is the fee to be capped at and why?

From Tuesday 10th July onwards any authorised claims management provider or legal service provider who offer services in relation to PPI cannot charge more than 24% of the amount recovered, inclusive of VAT.

In their proposals the government stated the average charge across the CMC sector for PPI claims was 28% and they felt a lower figure would mean better protection for consumers, particularly those who may be in financial difficulty.

How did the fee cap come about and who is bringing it in?

The majority of PPI claims which are logged directly with lenders and also with the Financial Ombudsman Service (FOS) are brought by claims management firms, or other third parties such as legal providers, on behalf of consumers.

The regulation of CMCs is to transfer under the guidance of the Financial Conduct Authority (FCA), and as part of that transfer of authority the FCA have been looking at what changes they can make to the industry.

One of the targets they had set was to cap fee levels for the reasons above, however with the transfer of regulation set to happen just months before the claims deadline of August 2019 an agreement was made in the Financial Guidance and Claims Bill that an interim fee cap would be established from the 10th July.

With the Claims Management Regulator, a unit of the Ministry of Justice, initially laying down the proposals they will be the ones implementing and overseeing the fee cap, in line with their existing jurisdiction over the claims management industry.

What does it mean for the PPI claims industry?

A uniform charging structure will mean different things for different claims companies. For those who were the target of the government’s plans, charging disproportionate fees before the cap came in, they will see their businesses heavily impacted. Some have even speculated that these companies may be forced out of the industry.

With this in mind, and in terms of clarity for the consumer, the industry may well benefit from this change and the resulting improvement in trust and reliability. For example consumer champion Martin Lewis has previously spoken about CMCs and the fact that he would be more in favour of consumers using them if they were more tightly regulated.

What does it mean for consumers?

Clearly paying less for PPI claims services is beneficial to all consumers as they will get to retain a greater portion of their financial award. They can also have more confidence in the claims industry as a whole, as mentioned above.

Although there is nothing to stop a consumer complaining about PPI directly with their lender, for some it is a matter of choice due to not having the time or experience to get their claims started.

So a more competitive pricing structure in the claims industry may encourage more consumers to check for PPI who might not otherwise have done so. With billions in lender provisions still remaining this could be vital in ensuring that all moneys owed by the banks find their way back to their rightful recipients.

One downside however could be that those who sign up for a PPI check before the deadline will pay a different amount to those who sign up afterwards, resulting in confusion and frustration for some. All claims firms must be clear on their charging structure and should inform the consumer what they can expect to pay right from the beginning of the process in an attempt to avoid such misunderstandings.

If all firms are charging the same from now on, how do you choose which one to use?

In their fee cap proposals the government may have judged that a lower fee better represents the ‘typical amount of work required’ to submit PPI claims – however here at The Fair Trade Practice we have years of expertise in the industry, and know that cases can become complicated and drawn out, like cases which are referred to the Ombudsman and can take years to resolve.

No two complaints are exactly the same, so having one of the biggest PPI claims firms in the country on your side can help ensure all your lines of credit are thoroughly investigated for mis-sold PPI. Many of our clients have commented on our friendly and professional approach across a range of cases.

So if you’re looking to use a claims management firm to check for mis-sold PPI and you’re deciding which one to choose, it’s reassuring to know there is a company out there that comes recommended by so many.

95%* of our new customers here at The Fair Trade Practice are recommended by someone they know – that’s how pleased they are with our service. With the average amount received by our successful customers being £3,400* you have nothing to lose and potentially lots to gain.

Complaints are currently at a four year high, and with recent increases in monthly payouts, cases escalated to the Ombudsman and lender provisions all the momentum is with consumers as the clock counts down to next year’s claims deadline.