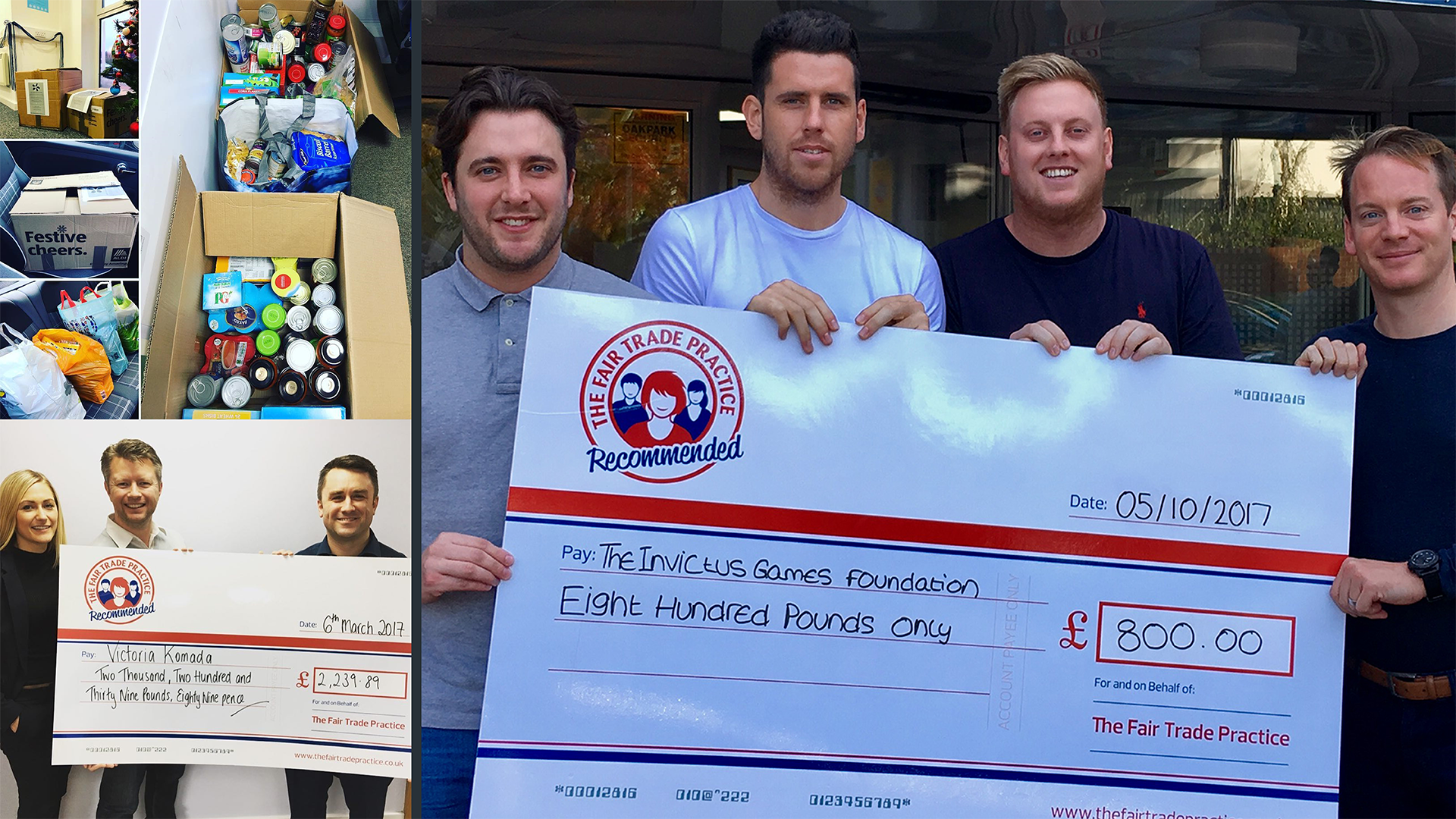 At The Fair Trade Practice we’re more than just an ethical market-leading claims management company. Our staff members dig deep into their own pockets as well as encouraging others to give generously year after year for a variety of good causes.

As it proved 2017 was no different, with TFTP raising thousands of pounds for charities both local and nationwide. Here’s a review of all our fundraising efforts over the past 12 months.

Marching to an impressive fundraising target

Our charity efforts began in March as we held our Mad Hatters Tea Party in aid of Brain Tumour Research.

Laying on a wealth of fantastic baked goods, our staff went all out to throw a great party and get behind ‘Wear a Hat Day’, the charity’s annual fundraising event which we also supported back in 2016.

16,000 people are diagnosed with a brain tumour every year, yet just 1% of the national research spend has been allocated to the devastating disease which kills more children and adults under 40 than any other form of cancer.

Hundreds of pounds were raised on the day, taking TFTP’s total contribution to Brain Tumour Research up to £426.47.

Also in March one of our Directors came across the story of Victoria Komada, a young girl who was born with an incredibly rare condition which saw her born with no vital bones in her legs.

Doctors recommended amputation but life-changing surgery was offered to Victoria and her family by a doctor in Florida, USA. However to have this vital work carried out they needed to raise £300,000 in funds and achieve this before Victoria turned 2.

Some truly selfless acts from members of staff saw teams raise hundreds of pounds, and all together the TFTP family was able to contribute £2,239.89 to Victoria’s cause.

Although the overall target was missed before her second birthday, it is hoped the money will still help Victoria and possibly enable her to have prosthetic legs in the future.

Also in the same month our staff members raised money outside of work by taking part in some tough physical challenges.

Whilst some spent hours in a Body Combat Marathon others donned the gloves to take part in a charity boxing tournament, all raising thousands of pounds for Cancer Research UK.

Sport helps reach for the sky – and the moon

In May two of our staff members travelled to London to take part in the Moonwalk in aid of Breast Cancer Research. As if walking 26 miles wasn’t impressive enough in itself, the event took place in the middle of the night and competitors wore their underwear!

The sky is often the limit for our staff when fundraising, but two team members took that a stage further this summer when they jumped from a plane in the name of charity.

Between them the duo raised more than £500 for CPotential and Southampton Doing It For The Kids.

Also in July a team made up of staff from The Fair Trade Practice took part in a charity 5-a-side football tournament. This was all to raise money for the family of a man who had suffered a cardiac arrest and a stroke, leaving him with paralysis on one side.

As the summer came to an end we were inspired by the amazing athletes competing at the 2017 Invictus Games in Toronto. Wounded, injured and sick military personnel came together to really show what can be achieved and what hurdles can be overcome.

A number of initiatives saw The Fair Trade Practice ultimately donate £800 to the Invictus Games Foundation, the charity behind the games, which went towards the maintenance of the WIS Noticeboard, a place where new opportunities, sports and even jobs are listed for former servicemen and women.

Thinking of others at a special time of year

With the cold chills and dark nights of winter closing in several members of staff braved the elements to take part in the Great South Run in October, with two members of the team raising almost £1,700 between them for the Stroke Association.

Speaking of feeling the chill, two gentlemen in our ranks decided to combat the cold this year by growing their facial hair in aid of Movember, raising almost £250 between them. Meanwhile one of our female members of staff went the other way by having her hair shaved off in aid of Macmillan Cancer Support and raised almost £600.

We finished the year in typical fashion with our festive bake sale in December raising hundreds for the Trussell Trust, a national foodbank network for whom we also asked staff members to donate food items to over the festive period.

Overall in 2017 we are so proud as a company to have supported a number of good causes to the tune of almost £3,500.

But we’re even more proud of our staff members, giving up their free time, pushing their physical and mental limits and doing amazingly selfless things and raising the best part of £5,000 between them.

In total £8,244 was raised by The Fair Trade Practice and our staff members last year, and we will keep fundraising into 2018.

Keep up to date with all our charity activity over on The Fair Trade Practice Instagram page.